No Weddings & A Funeral

So that was it. My Uncle Dave was gone. Wow!

My uncle Dave. Always present in my life. My mum’s brother, my cousin’s dad, hell he was almost like another dad to me – I’ve never known a world without him in it. But he was gone and we had to say good bye.

Things being what they are, the whole process of organising a funeral takes a bit longer back in the UK than it does over here in Ireland, so it was scheduled, after much pressure from my Dad upon “The Powers That Be”, for the Friday following his death, which gave me enough time to get home and spend time with the family.

But this wasn’t going to be an ordinary funeral. We hadn’t lost anybody ordinary, so why should it?! My Uncle Dave was a massive Man United fan, as are all the football fans in the family (you get disowned if you try and rebel. You either support United or don’t follow football. Simple as!) So, in honour of this, my Aunt & Cousins asked us all to wear something red to the funeral – as little or as much as we wanted.

Now, one of the things that comes with a large, extended family is family politics. Unfortunately one of the things that didn’t come was a third limo to fit much of the extended family in. So, things being what they are, my sister Colette and I ended up having to follow in my Mum’s car. Nothing wrong with that, I’m happy to go wherever. Before the cars arrived my Dad gave me a quick refresher about driving an automatic and a word of warning about the width of the car – in fairness he had a point, their jeep-type thing is MUCH bigger than my little hatchback. But I’m a fairly good driver so it was all cool.

Then the hearse and two limos arrived and we all agreed what order we would drive to the Crematorium in. Hearse, Limos 1 & 2, my Great Uncle’s driver in the next car, then some cousins in the Bentley, me & Colette in my Mum’s car and then two more cars of cousins. Fine. No problem there.

The time came to leave so Colette and I went to get into the car and wait for the cars to start passing us so that we could join them in the appropriate place. I started the car, put it into “drive” and waited my turn.

I lifted my foot off the break and the car began to move. Phew, I thought, we’ll catch them up in no time. As I got to the junction at the end of the road, about 30ft from where we’d set off, a kind man stopped to let me out. But the car wouldn’t move… the handbrake was STILL ON!

Now I was really panicking. We were going to be so late. My Mum was going to be doing her nut wondering where we were. We couldn’t even phone anyone to tell them what was going on as we’d all turned our mobiles off before getting into the cars. Oh shit, bollocky, arse!

Somehow I managed to reverse the car into a nearby driveway, still with the handbrake on and with the car generally making some very unhappy sounds at me. Needless to say, the tears had come flooding back by this point. I could see my cousins’ cars and my now deceased Uncle’s car – all of which I had driven before and none of which I had the sodding keys to. Shit, tits, arse & shit! I was actually going to miss my Uncle’s funeral at this rate. My Mum would never forgive me. I wouldn’t forgive me. A large scale meltdown was mere seconds away and then, voila! The handbrake came off.

So we ragged it all the way to the crematorium. All 3 miniscule miles of it. I was sweating with panic so the air con was on full, aimed at my forehead and armpits (I was in a grey sleeveless dress and sweat patches would simply NOT do!) as we sped along to try and make it in time. We sped right passed the entrance.

I parked up  as close as I could to the pedestrian entrance (as in I left the car with one rear wheel on the curb and the rear window half open. Could I be arsed to straighten it up – what do you think?) and my sister and I legged it through the cemetary at speed to try and make it in time.

As we reached the brow of the hill & looked down towards the chapel we could see a modest amount of people, and in particular, a woman in a red jacket. Phew, that’s them, I thought. So we ran to join them. But as we got closer I didn’t recognise any of them, there were no cars and we were getting some really funny looks. Oh shit! This isn’t our funeral.

As I turned to look at my sister, I saw some people on the other side of the building… at the entrance to the OTHER chapel. So we ran again. Through bracken, over broken bricks & jumped over a 2ft wall to burst around the corner to find our family, all waiting to start going into the chapel. It was like a bad joke. A scene from a Richard Curtis movie but without Hugh Grant, just me saying “fuck” repeatedly.

Once we had regained composure and my sister had pointed out that my forehead was covered in bits of tissue from where I’d tried to wipe the aforementioned panic sweat from it, we all started to move into the chapel to finally say goodbye to my Unle Dave.

As funeral services go, it was as good as they get. Standing room only and then some – we couldn’t even close the chapel doors so many people had come to say a final farewell and pay their respects. They even had speakers outside. Over 100 people.  Not bad for a man who didn’t really say very much to anyone.

My Dad read a eulogy that had us crying and laughing, as the best eulogies do, and my Uncle’s cousin read a poem. My Aunt & Cousins had chosen some really lovely music to be played during (no hymns though as it was a humanist service) and then to bid him a final farewell the song he’d have loved the most – “Come On You Reds” by Status Quo, the Manchester United song of 1994. Brilliant!

Afterwards it was back to the hotel for the wake. A sit down meal for 100 people and more speeches: a letter from my cousin to her Dad, a goodbye speech from his best mate, a 10-minute speech from my Great Uncle who wasn’t going to make a speech and another impromptu speech from my Uncle’s Cousin. Everyone wanted to say goodbye to the Dave that they knew. Every one of us knew him differently and every one of us was devastated.

I’d stayed up until 3.20 that morning putting together a slide-show presentation of images of my Uncle Dave that were going to be projected onto a wall of the function room. One less job off my Cousin’s to-do list in the run up to the funeral I’d thought – she’s got enough on her plate. Except when I plugged the laptop into the projector and switched it all on it all it had all gone horribly wrong. Everything had either reverted to it’s uncropped state and/or become horribly distorted. Despite a 348th dry-run that morning before we set off.

This cannot be happening to me. Not today, not now, not with this. I’d gladly let it happen to me in 100 client-facing presentations in the future if only it wouldn’t happen with this. But it did. Shit! Fortunately the team at the hotel were really lovely and let me camp out in their office for an hour while I re-cropped every single image. All 143 of them. Panic No. 2 over. Phew! Now to get on with spending time with my family and giving my Uncle Dave a great send off.

And how we did – tears, grief, panics, wasp stings (my sister as we were getting into the car), speeches, wine aplenty (he’d have had it no other way) and family stories being trotted out left, right & centre.

Along with which comes all of my Aunts, Great Aunts, Second Cousins, family friends etc ruing the fact that we couldn’t all get together under nicer circumstances… like a wedding. “Isn’t it a shame we have no weddings planned?”,  “When are one of you lot going to get hitched then?”, looking my cousins, my sister and I in the face when they said it. Jeez people, we’re trying! 😉

And so, we gave him a typical family goodbye after the service, complete with 11 solid hours of drinking, reminiscing, story telling and laughter – lots and lots of laughter. He for one would have cried with laughter at the drama that I went through for him on the day – if I believed in ghosts then I’d be pretty sure that most of it was his doing as it was his sense of humour to a tee!

But we gave him the send off he deserved & one I know he would have wanted. He’d probably be pretty gutted to have missed it.

I know we were all devastated that he had to. 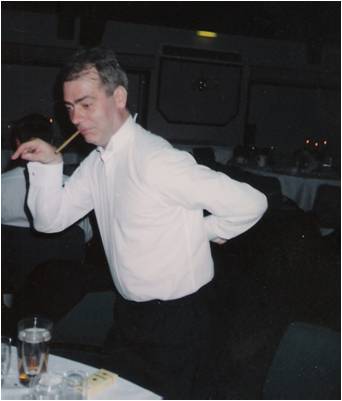 This entry was posted in mood, tales of stupidity and tagged Dave, family, good bye, manchester. Bookmark the permalink.

2 responses to “No Weddings & A Funeral”